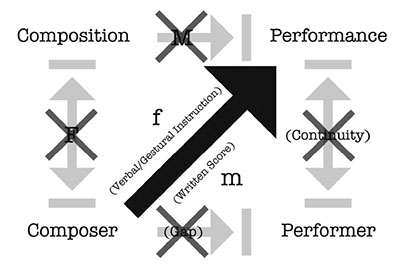 Improvised Composition F has been primarily been performed as dance, and Improvised Composition M primarily as music, but genre designations are not essential--the difference is between two modes of conveying what is composed: verbal/gestural instructions (a feminine mode) and written scores (a masculine mode). In fact, the first can also be arranged to be performed as music, and the second as dance (or any other genre where issues of performance and composition is relevant, such as theatre). But yes, the dichotomy persists.

Straight Lines is a project in progress, in which a found orchestral score is entrusted to an individual who has no previous knowledge on how to read a musical notation, but it nonetheless equipped with other forms of knowledge that s/he might employ to decode the score. The individual works with an orchestra, giving them instructions as to how the music should be played. The instructions must be as precise as possible, and derived solely from his or her reading of the decoded score. Any question that might arise in the process of decoding, as well as questions that arise from the musicians, must be answered via further reading of the score. Currently, I am working with the following individuals: (a) a police detective, (b) an 8-year old elementary school student, (c) an archaeologist, and, (d) a Star Trek aficionado.

Pierre Schaeffer’s notion of “acousmatique” refers to the separation of sound from the sounding body which caused it. This disembodiment of sound was crucial for Musique Concrète which aimed to establish a whole new system of musical organization for recorded sounds. The erasure of its physical origin facilitated the sound material’s entry to a new systemization solely based on the purity of reduced listening. But of course neither a complete disembodiment nor total reduction can actually be achieved. Outside the safe havens of the Parisian RTF electronic studio, the absence of sounding body first and foremost triggers the listener to search for, or deduce at least, the unknown origin of the sound. This is for a simple reason that in real life, encounters between bodies can be violent and even deadly. So the listening body attempts to identify, visually or conceptually, the sounding body to avoid the dangers of collision. For the composer to close his eyes and forget the physicality of sounds, he needed to retrieve into his studio, safely detached both in space and time from any effects of the sounding body. In this way, the notion of acousmatique along with reduced listening bases itself on a primal reduction of collisions—an annulment of physical percussions and repercussions.

But the very technology that enabled this annulment also adds an ironical twist to the tale. For the spatial and temporal separation of sound from its body relied on recording technology, and the recording and playing back of sound—from microphones to magnetic tape, and from the tape to the loudspeaker—were enabled and regulated primarily via the mechanism of electromagnetic forces. In this trajectory, sound waves were first transduced into electric signals through the workings of a coil and a surrounding magnet inside the microphone, which then were used to move the electromagnet so that a magnetic flux would be applied to the oxide on the tape. The play back simply reversed this process, outputting the sound from the loudspeakers by transducing the electric signal back into sound waves. The invisible power of magnetic field thus made it possible to make sounding bodies invisible. But what is magnetism if not the very force responsible for attracting and repelling bodies? The very technological condition for acousmatique disembodiment thus turns out to be the central force to dismantle the Schaefferian reduction of collisions.

The works from the Percussion/Repercussion series all hinge on this curious paradox of the notion of acousmatique under the metaphoric and literal rubric of magnetism. They intend to demonstrate, as well as feed upon, the fact that percussions and repercussions of bodies are not only the source of accidents, but also the primordial condition of sound, and therefore, music.